Very few times in history have popular books or movies produced further installments to their series that rival or even vaguely compare to the greatness of the first. The sequels have all of the best intentions, yet they fall short time and time again. And meanwhile everyone thinks, “you should have just quit while you were ahead”.

(Hopefully you don’t think this applies to my blog)

Following this logic, it’s no real surprise that my trip to Pompei fell short of the bar that was set by my visit to Vatican City on Tuesday.

Just three days later, our entire program loaded on a coach bus in the early morning hours to trek three hours south – all in pursuit of seeing what an active volcano can really do when it gets mad.

Right? Right?! Isn’t that what Pompei is supposed to be? A pale ghost town that was stopped in its tracks in 79 AD, leaving behind eerily barren city streets and all of the unlucky souls who are forever frozen in their last moments of panic?

Well if you thought that, you’re wrong. And that makes two of us!

I thought the real reason people come to Pompei is to discover a city that was perfectly preserved by a volcano, and while that’s true, I didn’t know that the real point of that isn’t to show a tragedy at all – it’s to show what Pompei would have looked like the day before Vesuvius let loose.

Nearly all of the volcanic ash and remnants have been removed, leaving behind ruins of temples, markets, baths, and homes. Instead of dusty grey ashy-ness, Pompei is a blend of brick, granite, and, wait for it… grass.

Because volcanic soil is ever so fertile, there is the greenest of grass filling the city squares and public spaces. Of course we know this, because it’s the same reason California can grow some of the best produce in the States. But did I expect it at Pompei? No sir.

There were a couple of plaster-cast people laying around, but they were in no way the main attraction. It was all about walking through the city streets that remain unchanged in nearly 2000 years. Which was great, it really was very cool to see. We also had a great tour guide, and that always makes learning ancient matter much more easily digestible. 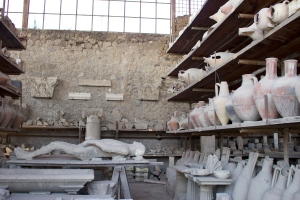 Was it worth six hours of driving for two hours of touring ruins similar to those I see every day in Rome? Eh, maybe not in my opinion.

That being said, now I went, now I know, and I’ve decided it wasn’t for me. I certainly didn’t have a bad time, it just wasn’t what I expected to experience in Pompei. If you’re an archeological buff, you might tell a completely different story.